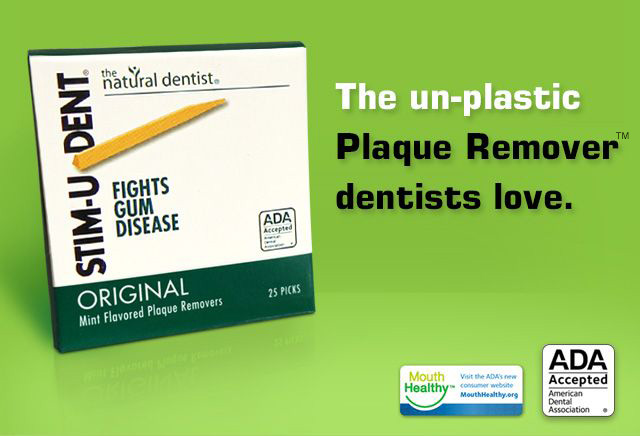 Designed in the shape of an isosceles triangle, Stim-U-Dent Plaque Removers fit perfectly between your teeth. By placing the base of the triangle against the gum tissue, you can remove plaque from the inner tooth surfaces and massage the gum tissue all in one motion.

The tapered point fits so perfectly between your teeth, no matter how tall or short that space is.  Perfect for dislodging food particles and plaque – keeping you clean and comfortable.

Made of special wood that creates the ideal texture and flexibility when wet, Stim-U-Dent Plaque Removers squeeze in between teeth and remove sticky plaque before it becomes tartar (the stuff your dental hygienist has to scrape off during your cleanings).  And the wood is biodegradable and comes from managed forests.

4. They stimulate your gums.

Stim-U-Dent Plaque Removers will remove plaque and food from between your teeth, but that’s only the beginning.  The in-and-out motion used also stimulates blood flow to your gum tissue – keeping your gums nourished and healthy.

The flexibility of the wood means Stim-U-Dent Plaque Removers will bend or break if you push too hard – they will never shift or damage your teeth.  (Don’t try that with a conventional wooden toothpick!)

6. You’ll actually use them!

Stim-U-Dent Plaque Removers unchain you from your bathroom sink – remove plaque after every meal, on the phone, watching TV, in the car, after you go to bed.  Seriously.   Anywhere, anytime.

And other fine stores...

Find more locations near you

What People Are Saying 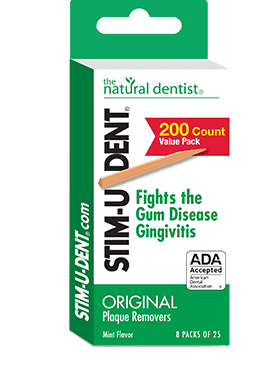 “I have used these for years, my Dad used them, I have always hated to floss, even brushing is not my favorite thing. I wish I’d used them all my life, but didn’t and had gum disease bad. Since using them have impressed my dental Hygenist with how clean my teeth are.”

“My key to success… I have always hated to floss and really never had time. I keep Stim-U-Dent in my purse and use it after I eat. My dentist is even impressed and that’s not easy to do!”

“These things are amazing. I’ve been using them for a couple years now – cleaning my gums before flossing and brushing at night and occasionally after meals. The shape is perfect and the wood softens up a little after moistening so they are comfortable but firm. The texture of the wood cleans really well. I always have a stash of these on hand – I can’t do without. Thanks! “

“Practicing dentist for 50+ years. Without a doubt, if used after every meal, combined with brushing and flossing, teeth should last a lifetime. Probably the single best treatment for inflamed gingival tissue (gums)! Use the thin ones and just be careful. Can be used anywhere, anytime. Every patient receives them at checkup appts.”

“Stim-U-Dents can be used as a prevention or as a treatment for periodontia.  They are particularly effective as a treatment of gingivitis – the initial stage of the disease.  I have seen many patients over the years that have eliminated periodontia all together just by using Stim-U-Dents daily.”

“As most of my patients know, I am in love with Stim-u-dents. Now I agree that brushing and flossing have been the gold standard for dentists and patients since the beginning of time, but recently I have been introduced to Stim-u-dents, and I think they are a fantastic product that should be used in conjunction as a part of your oral hygiene process.”

“Because the Stim-U-Dent picks are triangular, they fully clean the interproximal space of all teeth which are also triangular, as seen on most x-rays. I personally use them every day at home, in my car and at work. My gums have never been healthier.  Their biggest advantage over floss though, is ease of use. Patients get in the habit of carrying Stim-U-Dent and using them as needed throughout the day. I don’t have to remind patients to use Stim-U-Dent regularly once the habit is acquired.” 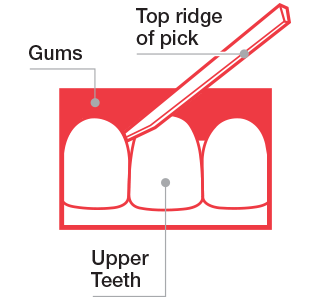 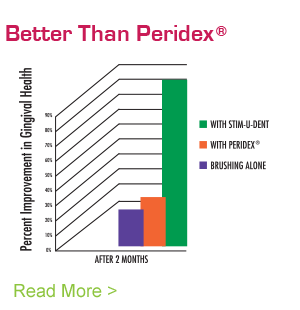 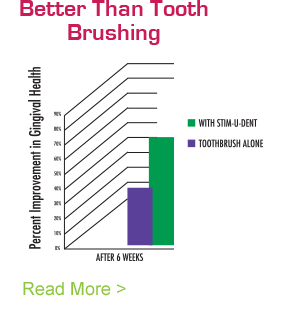 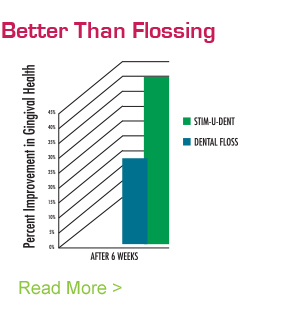